A life well lived carries on 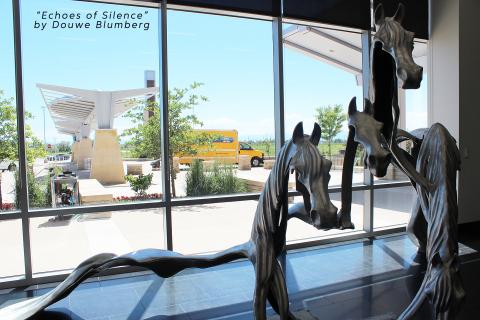 There is a deep interconnection between culture and community. Wilbur Flachman knew it.

So, when the native Iowan settled with his wife in Westminster in 1961, he set about making that connection tangible and visible. Flachman passed  away in September. But the foundations for art and culture he built in the north metro area will continue on. According to his daughter, that’s just the way he wanted it.

“It just goes back to his sense of community and his certainty that arts are a representation of who we are,” said Angie Flachman. “He knew in his heart that arts are able to unify us.”

Wilbur Flachman founded the Westminster Window newspaper and ultimately turned that effort into a successful specialty publishing and printing business as well. But even as he founded and built businesses and raised his family, he never quit working to build the arts and culture that he loved in his community and across the Denver metro area.

In 1983, Flachman helped to found the Westminster Community Artist Series, which continues today as the North Metro Arts Alliance. For nearly 40 years, the nonprofit has provided a wide-range of artistic and cultural programs to the area including both free and paid concerts, sculpture, art shows and competitions, artists-in-residence and many other programs. From the beginning, the organization’s focus has been bringing the arts out into the community with programs taking place in public buildings and parks with easy access and ample parking.

Flachman was an early supporter of the SCFD and championed it during its more than 30 years of service to the seven-county metro area. The way the district worked aligned perfectly with his vision of arts and culture. If we all contribute, we all benefit, and that benefit comes in the form of connection to our communities in a richer way. Flachman served for many years on the Adams County Cultural Council, helping to decide with his fellow volunteer residents how support for arts in the county would be distributed and what the cultural future of the county would look like. In fact, many public artworks you can see in the county came from Flachman’s efforts. In 2000, he won the SCFD’s Rex Morgan award, the district’s highest honor for service and commitment to the arts.

“People like Wilbur built the SCFD and have continued to support it over the many decades the district has operated,” said Deborah Jordy, the district’s executive director. “It’s really a testament both to who he was, and that he believed deeply in that the district continues to support organizations across Adams County and the entire Denver metro area.”

While Flachman loved the arts, like many of us, he wasn’t an artist himself.

“My Dad was really interested in arts on the patron side,” Angie Flachman said. “He loved the experience of it. And he loved watching other people experience it as well. I guess that’s just further evidence of his deeply held value that arts and community were linked, and that community was the highest good we could hold.”